What started out as a quick trip to the park turned into a big-time-fun-fest. Two big girls took Grace under their wing and Grace felt like the coolest kid in America. She loved playing with them and they were good to her. She even tried to fit in with the dialogue, and that was funny to watch as she barely made any sense. It was such fun to watch, but so very sad to see our little girl growing up sooo very quickly.

10years since the tragic events of 9/11 ….Grace & Dad decided to take a rural road trip and hit some tiny towns …a good way to see some real home-town America and reflect.   We hope that Grace never see’s such and attack on USA soil in her lifetime.

We headed north hitting towns so small many are not even on a map -as we zig-zagged off and on hwy 395.   We stopped and played at tiny rural parks as we took many leisurely breaks.   Eventually we headed on (dirt) backroads toward the Black Rock Desert -where we had an applesauce snack at the IBA memorial.   Grace has been here a few times before -including with her friend Eric.   Then, out to get silly on the playa -Grace LOVES the playa and nothing warms her dad’s heart more as he loves the playa too.

Eventually into Gerlach  -which was the biggest town that stopped at on this day.   They all know Grace at Bruno’s and she got the VIP treatment as usual.   Know one knows Dad’s name anymore, they just refer to him as “Grace’s Dad”.

Below is a primitive but fun video that shows Grace’s spunk and appreciation for the playa:

This evening Mom and Dad were discussing dinner thoughts when Grace assertively but politely interjected herself into the conversation with:  “House-a-Go-Go!!”  (Hash House A  Go-Go).   It was tough to out do her enthusiasm so that is where we went.   Always a decent meal and good fun.   Took some black and white shots, -just for fun.

Weekend of the Reno Air Balloons and mom had a crazy idea:   Why don’t we all get up real early and go to Nana & Papa’s house to watch the balloons!   Well we managed to do exactly that, mom and dad up before 5am (yes on a Saturday) and Grace up shortly after.   Before 6am we were at Nana and Papa’s and it was still dark!!  From their back yard we watched it slowly become light as the balloons lifted off.    Often times the balloons come right toward/over the house, so close it’s as if you can touch them, but this year the winds would take the balloons the other direction.  Grace had plenty of room to play and run around and even an episode of playing “Dr/Patient” was caught on video.  After the balloons we went home and then a trip to the grocery store via the stroller.

Been a while since we posted.   Dad and Mom were out of town on work and play while Grandma Jo and Grace had some great time together.    Tonight the family was back together and we went for a little walk around the neighborhood.

Was it a very breezy evening?  Or is Grace’s Hair especially messy?   Well, it was a tiny bit breezy  😉

After Rock Park we took a break and then headed up to Lake Tahoe.   Grace caught a needed but brief nap on the way up.

Grace had a great time playing -and so did Mom and Dad.   It was a fantastic day to appreciate Lake Tahoe -and a great day over-all.

Saturday night we had a late dinner at our favorite place:  Murrieta’s.   Always good fun.

Sunday morning we hit McDonald’s for a simple breakfast and then to Rock Park  …where Grace rode her bike and played along the Truckee River.   It was a great day of fun.

VIDEO of some Rock Park fun:

Remember the nice girl that Grace met at Hot August Nights? Well Today Ashley’s came over and spent time with Grace. They did very well together: -With grace showing off a bit, and testing the limits. Fun time at the park and a giggle-factory when playing at the house.

And, Ashley scored well on the interview!, -she’s got a good head on her shoulders. So no doubt Mom and Dad will be asking Ashley to come and watch Grace from time-to-time. Thanks much Ashley!

Grace was excited to see the cars and she loves parades so this would be an exciting morning!  We can’t get over how much Grace has taken to Hot Aug Nights, but it shouldn’t be surprising, as she loves anything where there is activity, stimulation and where she can people-watch and be nosy.   Yep, she has to be in everyone else’s business.  Mostly though, she just loves the attention.

The parade is the last major event and we arrived a tad early.   We stumbled into a couple of seats on some temp bleachers so we felt best not to pass them up.   Grace sat next to a very nice young lady -and Grace took a real liking to this girl!   And vice-versa, the girl and her family were very nice to Grace.   Before you knew it, grace was holding the girls hand and had her hand resting on the girls’ very cute poodle skirt.

So, it turns out this girl lives kinda near us, and is interested in babysitting.   Hmmmm, we’ll be in touch and we’ll soon put her through our patented babysitting interview.  🙂  She seems great, what a fun encounter.

As we were making our way back to the car -we were walking against the parade -and a convertible that was in the parade stopped.   Two adults in the front, two kids in the back.   They had a very large stuffed animal -a pink horse.   They insisted that Grace take it.   Dad politely said “no”, but they insisted.   They gave Grace the horse, which is about 3times her size and all the parade spectators clapped and cheered when the exchange took place.   Grace seems to rule the world …and dad was a bit embarrassed.   Good fun all around.

First thing out of the crib this morning, Grace and Dad headed off to see a few Hot August Night cars.   Been going on a week and we haven’t had a chance.   We went to the Nugget and only saw a very tiny sliver of the thousands of cars that are enjoying the Reno area this week.

Grace LOVED watching the cars and our expected two hours of fun turned into about 3times that!     Grace loved the cars, the people and of course the attention.   She drove a few cars, the bucket car she gained a big audience and even had the newspaper reporter and camera man there!  She was really hamming it up.   We also caught some young girls doing some poodle skirt  dances and Grace very much was fascinated with that.

…finally, you’ll note the last picture and the pink car.   Grace kept wanting to go back to that car and so finally dad asked the owner to pose in a picture.

Grace was so wound up that she didn’t take a nap today  -too bad as we had planned to go back for the drag races  …..but instead we’ll likely go to the parade in the morning.

A fun birthday party with crazy glasses and party-favors! 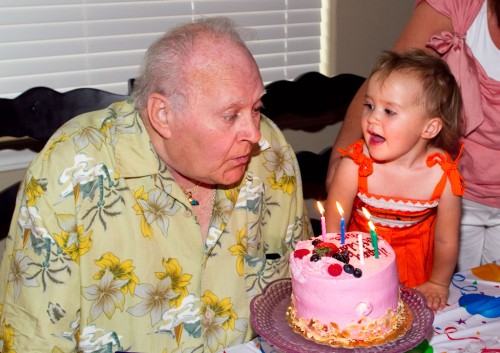 A lot has happened, and it has gone sooo fast.   Everyone warned us to take advantage and enjoy every minute.   We have done a great job of doing just that! -But still it has gone way too fast, and continues to go way too fast.    Our little girl is growing up so very quickly.

It is great fun for us to look back on the past years via this blog ….we hope family and friends enjoy it in the same way.   Grace has had her picture taken more than a few times  🙂