After a long week for Dad …..Seemed like a good night to go out for dinner.  So Grace and Dad made a “Date Night” of sorts and we went to our favorite Mexican Restaurant:  “Murrietas”

It was excellent as usual and Grace got the VIP treatment as usual.  In fact, even more so as the owner Moana was there and she absolutely loves Grace.

Grace ate a huge dinner and impressed everyone the way she’d put salsa on her fork, then use the fork to put the salsa on her tortilla chip and then eat the chip.    As usual the staff took turns giving Grace tours of everything, including the kitchen …and Moana showed Grace how to use the fancy register -which Grace learned very quickly.

A few good pics and soon we’ll go through and tweak and print some of the better ones.

Grandma Jo and Grandpa Phil came down to stay with Grace for 5days while Dad and Mom went on a New Year’s Road Trip.    Wednesday night we did a simple gift exchange and Grace receive a very peculiar looking doll.   She wasn’t sure what to think of it but eventually took a liking to the odd looking baby.

And then Dad and Mom went on a mini vacation and took MANY pictures:

Grace woke up this morning feeling much better but still went to the doctor.   It seems she had some sort of virus and it has pretty much run it’s course, -but what a tough few days it was for her.  Very hard to see little people not feeling well.   Grace is still not 100% and you can see it in her eyes, but for the first time in over54hours she’s holding down food and certainly heading the right direction.

Grace felt well enough that we had Grandpa Rose, Grandpa Ray and Uncle Brian over for a tardy Christmas gift exchange.   It was some good fun!

Grace started not feeling well yesterday afternoon and became nauseous  -This lasted through the night and into this morning.   Both Grace and Dad got very little sleep last night, but did get lots of couch-time together.   This morning when mom came home from work Grace opened a few small Christmas presents and we gave her some more medicine.

A bit later Grace and Dad went to the drug store and bought Saltine Crackers, and Pedialyte.  We thought getting out of the house for a few minutes would be good, as it is a beautiful day here in Reno.

Grace hasn’t eaten in over a day.  She also hasn’t held down much liquid either.  But hopefully that is changing:  This afternoon she held down a few drinks of water/pedialyte and 1/2 of a saltine cracker.  After some Tylenol she eventually fell asleep on the couch. We hope the big nap will do her good.

Not the typical Christmas!! But we had planned to do our big celebration tomorrow and then when Grandma Jo and Grandpa Phil come down later in the week so at least so far we haven’t canceled any plans. Let’s hope Grace feels better tomorrow, and let’s hope this needed nap is a long one.

First thing this morning was a Bath!   Mom Came home mid-bath and gave some needed supervision 🙂

Hard to believe it’s Christmas Eve already.  Most of our festivities will be small and spread out over the next days as Kathy’s work schedule and family schedules make that the best plan this year.

–>Next Up, Grace and Dad Go Shopping, mostly to get out-n-about, plan was to wear Grace out for a good good nap.  That certainly worked out!  She nearly fell asleep in her chair in the restaurant.

Grace immediately got busy with her one-person-tea-party on the kitchen floor. She loved it, just like she loves Alecia.

Today mom and grace were busy all day and Grace didn’t want to take a nap …….but this evening she conked out on the couch while watching Gretta VanSustren (Grace’s favorite TV show)? …it was a cute site as she never falls asleep before bedtime, but tonight she was just plain worn out!

….but this evening it started snowing so Grace and Dad made a winter run to Jamba Juice and each had a Strawberries Wild Smoothie and watched the snow fall.

Grace was more interested in eating the snow than anything else. She ate a lot of snow this morning!!

We wanted to get a nice picture of Grace in her Christmas dress, …..but it just wasn’t the night. Grace wasn’t too keen on the idea.
A long day for everyone, we decided to go out for dinner instead. This turned out to be a much better idea! We think when you see the pictures of broccoli girl you’ll agree!

Dad and Grace went to see Santa and Grace was not impressed. Dad had hoped to get some good pictures, but Grace would not get near the old grey-bearded man. Not even *with* dad. So much for Santa on this trip but maybe we’ll try again with mom in a few days. We did get this cute picture on our way out though:

We’re playing with an upgrade to the camera and took a few pics: 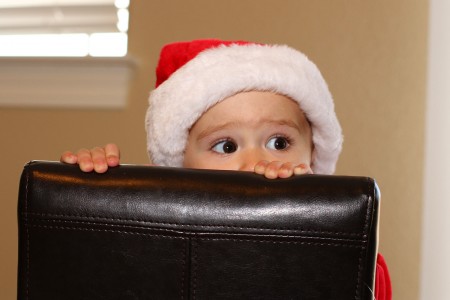 We had some good fun putting up the Chistmas tree -….and we’re FAST!